Waldemar Jungner dreamed of becoming an inventor and worked extremely hard despite his bad health. In 1899, he patented a battery that could run under extreme conditions. 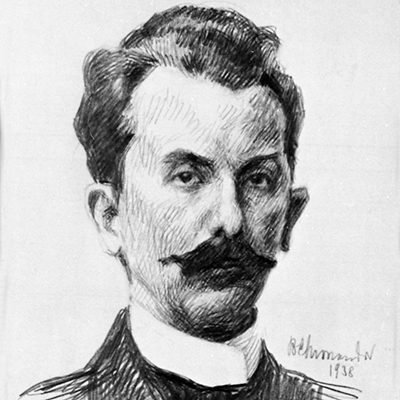 Failed harvests in 1869 caused famine throughout Sweden. This affected the newborn Waldemar’s health. He was later struck with measles and scarlet fever, and suffered serious complications with both. But he was curious and read a lot. At age eleven, he began studies at Skara upper secondary school and graduated in 1889. Throughout his years at school, he loved to read books about the great inventors and was inspired by the famous Swedish physicist and chemist Svante Arrhenius. In 1889, Waldemar began at Uppsala University, where he studied chemistry, mathematics, astronomy, botany, geology and Latin. He continued his studies at the Royal Institute of Technology (KTH) in Stockholm. Waldemar Jungner wanted to be an inventor.

Waldemar’s first years as an inventor were difficult. There were few who believed in him. Waldemar worked hard. His first invention was a fire alarm called “Pyrofonen”. The principle behind the invention was that different metals expanded at different rates and dimensions when exposed to heat. Pyrofonen consisted of a series of iron and copper wires soldered together. The copper wires were connected to a signal apparatus. When heated, the tension in the metal would cause a magnetic needle to deflect and activate the alarm. Waldemar Jungner also experimented with electric sodium carbonate production, electric conveyor tubes and a rock drilling device that he patented in several countries.

Waldemar began to think about his accumulator in 1890 while on a train to Uppsala. The train passed ariverand he began “involuntarily thinking about all the energy that was expended without gain. Wouldn´t it be possible to construct a light and transportable power reservoir, which after charging in a waterfall could be used to propel a train?” The only accumulator (a chargeable battery) that existed at that time was the lead accumulator. He wanted to construct an accumulator with an invariable basic electrolyte. (Electrolyte is a substance — often a fluid — that can conduct electric current). This means that the electrolyte only would need to conduct the electric current. It wouldn’t take part in the chemical reaction that caused the current and be consumed in the same way as in the lead accumulator.

Waldemar also experimented with a number of other metals that had better properties than lead. The objective was to create an accumulator that was sustainable and functioned even under extreme conditions. Waldemar Jungner’s first working accumulator was a silver-cadmium battery. A car equipped with such a battery was test-driven in Stockholm in 1900. The car drove almost 150 kilometres in one stretch without the battery needing to be charged. But Waldemar believed that silver and cadmium were too expensive and replaced them with nickel and iron. He was awarded a patent for his invention in 1899 and in 1900 founded the company Ackumulator Aktiebolaget Jungner.

Two years after Waldemar Jungner, the famous inventor Thomas Edison patented a nickel-iron accumulator. Ackumulator Aktiebolaget Jungner ended up in a long patent dispute with Thomas Edison. Edison, who had large economic resources, won. The patent dispute and the competition led to financial difficulties for Ackumulator Jungner. The crisis was aggravated when the factory bungalow burned down in 1905.  Waldemar released his accumulator patent to other manufacturers and began devoting his time to other projects. Among other things, he invented a method for simultaneously producing cement and potassium oxide.

Waldemar Jungner’s company managed to survive and eventually changed its name to Svenska Ackumulator Aktiebolaget Jungner. The production was located in Oskarshamn. Today, the company is called Saft AB and manufactures nickel-cadmium batteries. These batteries are very durable but have a low capacity. They are therefore used primarily as reserve power sources or in locations with extreme temperatures.

Rescue mission at the North Pole

On the rescue mission to save Umberto Nobile and his companions in the tragic 1928 expedition to the North Pole, several accumulators were thrown from an airplane in an effort to get the expedition’s radio to function. Waldemar Jungner’s nickel-iron accumulator was the only one that worked.

Waldemar Jungner was elected into the Royal Swedish Academy of Engineering Sciences in 1922 and two years later received the Swedish Chemical Society’s Oscar Carlson Medal. Waldemar Jungner died in 1924 of pneumonia at the age of 55.