Gustaf de Laval was a productive inventor with vision. The steam turbine, the milk-cream separator and the milk-skimming machine were his most famous inventions. Gustaf was not quite as good at handling his finances, however, and died in extreme poverty. 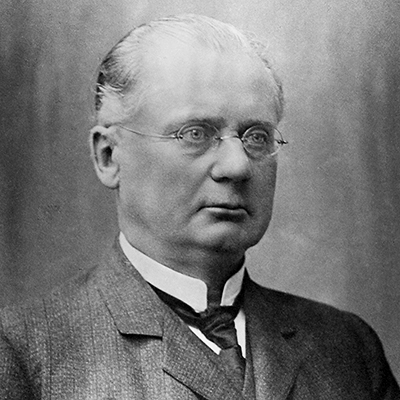 Gustaf de Laval was born in the Swedish province of Dalarna, though his ancestors originally came from France. His father, Jacques de Laval, was an officer and land surveyor. Gustaf´s interest in technology and engineering was born early, and he was already building his first steam engines at age ten. In 1866, he completed his studies at Teknologiska Institutet (today the KTH Royal Institute of Technology). The recession of the mid-1860s meant that Gustaf was unable to find work corresponding to his ambitions. He applied to Uppsala University, studied chemistry and earned his doctorate in 1872.

The quest for success

The young Gustav was passionate about his ideas. He would achieve great things and be Sweden´s saviour. This attitude characterized his entire life. Gustaf´s first project was a glass factory where glass bottles were to be formed using centrifugal force. But market prices on bottles fell and the project ended in a financial fiasco.

In 1874, Gustaf began working as an engineer at the Kloster ironworks in Dalarna. It was there that he got the idea for two inventions that would make him world-famous.

At that time, cream was separated from milk simply by the milk being left to stand until the fat floated up to the surface and could be skimmed off. The milk-cream separator was based on a simple principle — a rapidly rotating container creates centrifugal force. Rapid rotation causes heavier substances to be pressed out toward the walls of the container while lighter substances are collected in the middle. In this way, liquids with different densities can be separated from each other. The milk separator had two outlet pipes, one for cream and one for the skimmed milk. In 1878, Gustaf and his business partner Oskar Lamm patented the invention. Gustaf was awarded the Wallmark Prize from the Royal Swedish Academy of Sciences for his invention. The milk separator won first prize in a number of international exhibitions and in 1883, Gustaf and Oskar Lamm founded the company AB Separator (now Alfa-Laval). Success had been achieved, and the milk separator was used in the majority of Swedish farms during the end of the 19th century and the beginning of the 20th century.

The idea to use water vapour as a propellant was not new. The steam turbine was actually described 2000 years ago by the Greek mathematician Hero. The turbine converts the kinetic and thermal energy of water vapour into mechanical rotary motion. The nozzle of the turbine blows steam onto the wheel and makes it rotate. Gustaf was awarded a patent for his steam turbine in 1883. At the same time, the Englishman Charles Parsons also constructed a steam turbine. Gustaf´s steam turbine, with the — for that time — astounding rotation speed of 30,000-40,000 revolutions per minute, quickly became a best-seller. The company “AB de Lavals ångturbine” was founded in 1893 (now known as STAL-Laval turbin AB). Today, steam turbines are used in power stations to run electric generators.

The de Laval nozzle is an hourglass-shaped tube that accelerates gases moving through the tube to supersonic speeds (i.e. faster than the speed of sound). The same principle is used in steam turbines, modern rocket engines and supersonic jet engines.

Gustaf wanted to build a ship that would cross the Atlantic in ten hours. A prototype was built and a test run was conducted on Lake Mälaren. The hull contained a high-pressure air machine that forced the air out of small holes in the hull. This caused an air cushion to form and reduced the friction between the hull of the ship and the water. In 1961, the English company Westland Aircraft launched the world´s first hovercraft. The company had some problems patenting it though, since Gustaf had applied for a patent on his hovercraft at the end of the 19th century…

Gustaf didn’t live in the now. It didn’t matter to him if his debts mounted. New ideas and new inventions were the only things that were important. He dreamed of helicopters and fast ships. Nobody could control him and his business partners left him one after the other. The money that he made on the success of his milk-cream separator was swallowed up by other projects. One failed invention was the Lactator, a mobile milking machine. The machine was too expensive and complicated and the farmers complained that their animals became sick after having been milked with the Lactator. The AB de Lavals Laktator company survived for two years. In 1897, the company was dissolved and the employees dismissed. There are several other similar stories.

Despite his 92 patents and 37 companies, Gustaf de Laval died in extreme poverty when he succumbed to cancer in 1913. His widow had to apply for bankruptcy for his estate. “With the death of Doctor Gustaf de Laval, we lose one of Sweden’s most remarkable and important innovative geniuses, whose work exerted influence on the country’s economic climate and development and whose name is known throughout the world…” wrote Swedish newspaper Aftonbladet in February 1913.