Christopher Polhem was an industrialist and inventor way ahead of his time. In 1716, he was ennobled by King Charles XII of Sweden for his contributions to Sweden’s technological development. 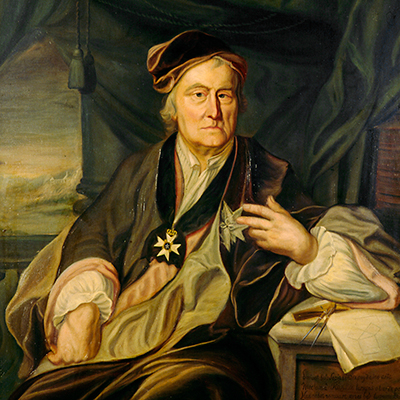 Christopher Polhem’s parents were Christina Eriksdotter Schening from Vadstena, Sweden and Wulf Christopher Polhammar, a German merchant who immigrated to Visby where Christopher Polhem was born in 1661. He was orphaned at the age of eight. After a couple of years living with his uncle in Stockholm, he took a job as a farmhand in Uppland. Having a talent for mathematics, he soon became supervisor at Vansta Manor Farm in Södermanland, where he remained until 1685.

Christopher became more and more interested in technology and engineering, and set up a workshop for himself where he made tools, utensils and clocks.

Christopher began studying at Uppsala University in 1687. He managed to repair two astronomical clocks for his entrance examination. After which he studied mathematics, physics and engineering for three years until he felt he had studied enough. By which time he had also managed to repair the Uppsala Cathedral astronomical clock which had ceased to function. This achievement meant that Christopher Polhem’s reputation as a skilled engineer spread quickly.

In 1693, Christopher was commissioned to improve the technology for extracting ore from mines. When the construction model was complete, he was permitted to show it to Charles XII of Sweden. The king was impressed and gave him the go-ahead. The machine transported ore from the mines in barrels, conveyed them to the smelting house where the barrels were emptied and then returned to the mine for a new load. Everything was automated, requiring no manual interaction except the loading of the ore into the barrels that were to be lifted out of the mine. This type of construction was called a hauling plant and was hydro-powered. Power was transferred to the machine from the water wheel with the help of linkage. This hauling plant was called the Blankstötsspelet (the Great Pit winder) after the pit at the Falu copper mine, where it was installed in 1694.

The Swedish Board of Mines appointed Christopher Polhem as Director of Mine Engineering in 1698. Two years later he became ‘Art Master’ of the Falu mine. The Art Master supervised the extraction of ore from the mine and the machines being used.

In order to see and learn about the technologies being used abroad, Christopher Polhem was awarded a travel grant by the king. In 1694, a journey began that would take him to Germany, Holland, England and France, where he studied structural engineering and factories. He is likely to have accumulated many ideas and impressions and brought them home with him.

At this time, a lot of people believed that more goods should be produced nationally instead of selling the raw materials abroad and then buying them back as expensive finished products.
For this reason, in 1700 Christopher Polhem and Gabriel Stierncrona established a manufacturing plant, a factory, in southern Dalarna, Sweden. The factory was named after financial backer, Stierncrona, and the former name of the site, Sund. The manufacturing plant was thereby christened Stiernsund, a place where Christopher wanted to produce everyday household items. He also started manufacturing clock parts, something that would greatly facilitate clock repairing.

Everything was to be as rational as possible. Machines instead of people were to produce the goods. This was unique for that time. Christopher invented and installed a lot of ingenious machines at Stiernsund.

Christopher Polhem’s wife passed away in 1735 and he left Stiernsund to reside with his daughter and son-in-law in Stockholm. Two years later, the facility at Stiernsund was ravaged by a fire, destroying most of the buildings and machines. After reconstruction, however, the operation continued long after his time.

Christopher Polhem felt that a technical laboratory would be an important part of future engineering education. Which was why he established the Laboratorium Mechanicum in 1697. The intention was to teach, research and demonstrate to visitors everything that could be achieved within technology and engineering.

Part of the pedagogy was to illustrate all of the machinery elements that every engineer should be familiar with. The mechanical alphabet was the name he gave to collection of wooden models that demonstrated simple principles for motion conversion and which was used in teaching. The collection was returned to Stockholm after Christopher Polhem´s death and became part of the Royal Model Chamber. Nowadays, the remains of the Model Chamber are part of the National Museum of Science and Technology’s collection, and are on display in the Christopher Polhem exhibition.

When the model collections were in Stiernsund, they were used in the teaching of engineering. The Swedish Board of Mines awarded scholarships for studies in engineering at Stiernsund. Students, Carl Johan Cronstedt and Augustin Ehrensvärd, who were there in 1729, gave testament in words and images to the operation. Their notebooks are still held in the archives at the National Museum of Science and Technology.

The construction of sluices, dams and docks was also something that Christopher Polhem tackled. The falls at Trollhättan needed sluices so that the freight being shipped along the Göta River didn’t have to continue on land. He had plans for this, which he worked on together with his then assistant, Emanuel Swedenborg. Educated at Uppsala, Emanuel was a scientist, engineer and subsequently religious philosopher. The sluice project was completed in 1754, after the death of Christopher Polhem.

Christopher Polhem and Charles XII of Sweden also had plans to build a canal that would connect Sweden from east to west. The Göta Canal was, however, not completed until the following century, in 1832.

The Sluice construction in Stockholm was Christopher Polhem’s final undertaking. He was now old and had to be carried down to the sluice to see his work, which was led by his son, Gabriel. Christopher Polhem died in 1751 at the age of 90.