The pioneer of the propeller and the armoured ship was a national hero in the US, but he was born in Värmland, Sweden. His first work experience was on the construction of the Göta Canal. 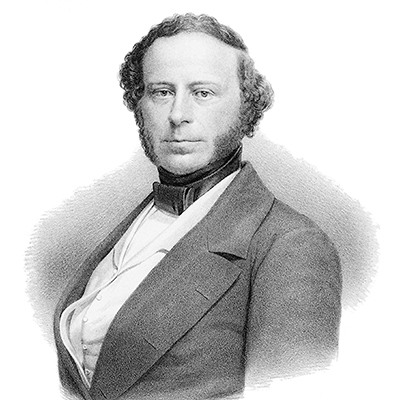 John Ericsson was born in 1803 in the mining village of Långban in Värmland, Sweden. He showed a talent for technology early on and at the age of just eleven he worked in the drawing office for the construction of the Göta Canal. At the age of 20 he starting experimenting with a hot air machine, with which he intended to replace the steam engine. The idea was to use hot air as a propellant, instead of steam. His hot air machine had a heat source that heated the air inside a cylinder, generating a high pressure and setting the piston inside the cylinder into motion. It proved to be difficult to find backers in Sweden. His ambitions took him to the flourishing industrial nation of England, where he would soon become a world-class inventor.

Major success, however, eluded him. After 13 years in England, he disappointedly relocated to the US, who had decided to build three battle frigates using Ericsson’s propeller.

He arrived in his new homeland, America, in 1839, where he further developed his ideas with hot air machines and propeller-driven vessels. The first propeller-driven battleship, the Princeton, was built in 1843. That year, the Princeton competed against one of the most famous vessels of the time, British paddle steamer, the Great Western. The Princeton won and John’s propeller was praised.

A few years later, John became an American citizen. He took out the patent on his hot air machine in 1856. The patent covered the US, France, England and Sweden. Thousands of these machines were subsequently sold throughout the world. They were easy to maintain and could be powered with a variety of different fuels, but they weren’t as powerful as steam engines. The American Civil War broke out in 1861. One of his most revolutionary constructions, armoured vessel the Monitor, defeated the southern states’ feared Merrimac armoured vessel in a epoch-making maritime battle. As a result, John Ericsson became an engineer with a global reputation.

His final major project was an invention he hoped would avert a future energy crisis – a machine powered by solar energy. John Ericsson built a hot air machine equipped with a mirrored trench that concentrated the solar rays towards a space in which water was converted into steam. The sun machine never became the success he had hoped.

Despite his global reputation, John lived a very simple life in a small apartment in New York until his death in 1889, aged 86.