Carl Edvard Johansson’s invention was a set of steel pieces. This may not sound particularly exciting, but these small pieces of steel created modern industry. 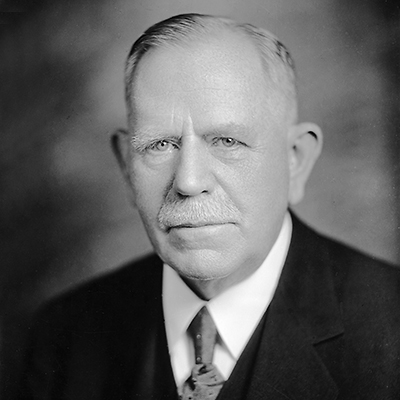 Carl Edvard Johansson’s (or Mått-Johansson’s – Measurement Johansson’s) name is not that widely known, despite his invention having made modern-day mass production possible. He was born in 1864 in Västmanland, Sweden and enjoyed measuring and creating things. When he was thirteen, he built a steam engine and attempted to construct a engine-driven ‘horseless carriage’.
When C.E. Johansson was16 he travelled to America, where his brother, Arvid, had moved to two years previously. They worked at various workshops and C.E. studied mathematics and technology at the Gustavus Adolphus College in Minnesota. In 1884 he returned to Sweden and began studying at the Eskilstuna School of Technology. A few years later, he began working at the Carl Gustafs Stads Rifle Factory in Eskilstuna, where he was appointed Inspection Chief. His job was to inspect the various measurement tools used in the manufacture of weapons.

Weapon production, which was the first mass production of that time, requires precision. The parts of the various weapons were all to be the same size. For example, one barrel should fit all rifles of a particular sort. At the factory, they used various different measuring tools, which C.E. considered to be coarse and unreliable. Each product often had its own measuring tools and they could not be used for anything else. If a larger or smaller measuring tool was required a new one would have to be made.

C.E. Johansson realised that a standard measurement system was required. He wanted to produce a set of gauge blocks that could be combined with each other in a variety of ways. Johansson created a combination gauge block set, first containing 102 pieces, then 46 pieces of steel, that was to become world famous. They were smooth, smoother than glass. If you held two pieces together they almost fused together and could not be pulled apart. Instead they had to be pressed apart, the way you rub the palms of your hands together. The steel pieces could be laid out in a row, creating a rod that could be picked up and held without it falling apart.In order to produce the steel pieces, C.E. Johansson modified his wife’s sewing machine and installed a rotating grinding wheel. The metal pieces were dipped in a hot chemical bath to stabilise the steel. There was also a special measurement apparatus that he showed to no-one. We still don’t know how he managed to give his steel pieces such precise measurements. C.E. Johansson said that he could split a hair into 200 pieces and measure it with his gauge block set.

In 1897 he produced his first gauge block set. C.E. Johansson really had to fight to get the Swedish patent for the gauge block set in 1904. Two years earlier he had received the patent in England and in 1903 his invention received a silver medal at an exposition in Paris.

C.E. Johansson AB,  a Swedish company, opened its first factory in Eskilstuna in 1909. After a few years, the small factory had grown into a million dollar enterprise, with a presence in the US. Ten years later, Measurement Johansson was celebrated in the US. According to the American press, his gauge block set, or Johnny Blocks, were the reason behind America’s successes in the First World War. ‘Swedish quality’ became a known concept in the US.

There is a story about how Measurement Johansson once turned away a job seeker who he had asked to come back the following day for his answer. “No, I’m not giving you a job. You aren’t well-kept. Yesterday there was a button missing from your jacket and you haven’t sewn it on yet,” he is supposed to have said.Despite his successes, C.E. Johansson’s company was hit with financial problems. In 1923, he moved to the US and was employed by automobile king, Henry Ford. In the foyer of Ford’s company stood a glass cabinet with the Encyclopedia Britannica together with C.E. Johansson’s gauge block set. According to Ford, both were of great significance. Henry Ford had a lot of faith in C.E. Johansson, and only he and Henry Ford’s son were allowed to enter Ford’s office without knocking.When Measurement Johansson was 72, he felt it was time to retire. He returned to Sweden in 1936 and passed away in Eskilstuna in 1943.

Seven years after C.E. Johansson’s death, the town of Eskilstuna wanted to erect a monument in his honour, Carl Milles’ famous sculpture, The Hand of God. The idea was to show that Measurement Johansson was a creative person who had control of the world around him.This was when people started saying that it was Hjalmar Ellström, who worked at the rifle factory at the same time as C.E. Johansson, who had invented the gauge block set. A statue could not be erected to honour the wrong man. The debate became heated. One of C.E. Johansson’s defenders was his old friend, Arther Spångberg, who suggested that the gauge block wasn’t actually a new invention. People had always used measurements, but C.E. Johansson’s gauge block set was so precise that it changed all industrial manufacturing. It is possible that other people had similar ideas, but never put them into practice.C.E. Johansson is still seen as the first person to invent the gauge block set.