The “Founder of the Swedish mechanical industry” and Swedish steamboat pioneer Samuel Owen was born in Norton-in-Hales in Shropshire, England, in 1774. 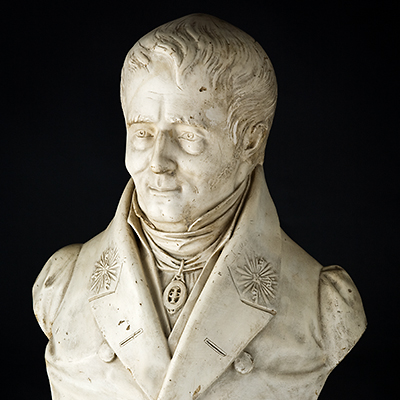 Samuel Owen (1774–1854) was born in the small village Norton-in-Hales in Shropshire in England on May 12th 1774. In 1796, he got a job as an apprentice at the new steam engine factory started by James Watt and Matthew Boulton in Soho close to Birmingham. Some years later, he moved to Matthew Murray´s engineering company in Leeds which made more advanced steam engines.

In 1806, Owen was offered a leading position at Bergsund’s foundry and factory in Stockholm, and he decided to stay here and not return to England, but in 1809, he left this position and opened his own workshop and foundry on Kungsholmen. Here, Owen´s foundry and factory manufactured various things, for instance, balconies, garden sofas, small and large steam engines and machines for customers in and outside Sweden. In 1819, Samuel Owen sold a large steam engine, four mill stones and two threshers to a customer in Rio de Janeiro in Brazil, which was the first steam engine in this country.

Samuel Owen was also engaged in the development of steam engine driven ships and was the first person in Sweden to build a ship with a steam engine. In July 1816 he presented the first experimental steamship “The Waterwitch”, first tested with a propeller machine and later with side-wheels, which was slightly better. The first commercial steamship was called “Amphitrite” and was used for passenger trips to the Royal Castle of Drottningholm and cities on lake Mälaren from 1818.In 1821 his steamship “Stockholm” made regular trips to Åbo in Finland, a pioneer task.

In 1830’s, he applied for and got a patent on a way of building steamships with hulls of iron instead of wood, and in June 1840, such a boat with the name “Samuel Owen” was built at his factory, the first in Sweden with a hull of iron. Some years later, Owen went bankrupt in one of the financial crises of that time.

The government then decided to give him a lifetime pension with the motivation that he had made many important contributions for the development of Swedish industry. However, he continued to work and was employed for some years at Åkers Styckebruk. He probably visited the big industrial exhibition in London in 1851, but in 1853 he became sick and died in February 1854.

Owen educated many young men at his foundry and workshop, and several of them continued to work in different areas of the emerging Swedish industry. In 1874, the railway pioneer Adolf Eugen von Rosen arranged a meeting to collect money for a memorial at Owen’s previous premises and his grave. Actually, so much money was given, that the rest was used for a fund giving grants to students at the Royal Technical University KTH.

In the National Museum of Science and Technology you can see the biggest steam engine built by Samuel Owen in 1832 for the coal mine at Höganäs. This steam engine was in operation until 1904. In the museum,s collections there is also a drain tap for a steam engine installed in 1844 at Lindnäs farm in the province of Småland by Samuel Owen himself and a lathe built for Åkers Styckebruk. National Museum of Science andTechnology also owns a manuscript with Owen’s remarks that he was the first to build a propeller steamboat, various construction plans done by Owen, his writings regarding steam engines which he studied during a trip to England and Scotland in 1829, and many other things.

The book “Samuel Owen: teknik och ångbåtspionjär” by Arne Sundström. The book was published as a yearbook in 2009 in the series Daedalus by the National Museum of Science and Technology.