Maria Johanna “Ninni” Kronberg was a Swedish inventor. Her patent for powdered milk formed the foundation for the baby-food company Semper AB. 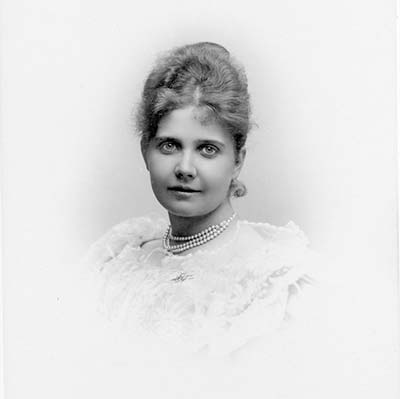 Ninni Kronberg was born in Gävle in 1874. She was educated by governesses and never received high school qualifications. In 1896, aged 22, she married a merchant, Erik Kronberg. Her hobbies included painting and crafts, and the couple also liked to travel and enjoyed sailing.

Her husband was a partner in B G Kronbergs Spannmålsaffär & Maltfabrik. Following his father’s death in 1901, he took over this malt and grain business, which became a limited company in 1915, operating under the name AB Kronbergs Maltfabrik. Working together with her husband, Ninni Kronberg also became involved with the business.

The malt factory went into liquidation in 1922. Around this time, the childless marriage had begun to falter and, in the early 1920s, Ninni Kronberg moved to the south of Sweden to live with her friend Gudrun Juel-Westrup and her husband, the diplomat Wilhelm Westrup, at the Rydsgård estate in Skåne. The Kronbergs’ divorce was finalised in 1925.

Previous attempts had been made to preserve milk at Rydsgård, but without success. This became a challenge that interested Ninni Kronberg. Using the knowledge she had acquired during her development work at the malt factory, she immediately produced the Practic yeast agent. This product was launched by the company AB Practic Comp Ltd, which she founded together with the Westrups.

Following further nutritional research she conducted at Rydsgård, Ninni Kronberg was awarded the first patent in her own name in 1927. She had developed a milk serum preparation intended for use in dough conditioning (patent 69730). This milk serum represented a major step towards what would be her great success – powdered milk.

Attempts at producing long-lasting powdered milk had previously been made both in Sweden and in other countries, with varying results. In 1934, after several years of working in the laboratory, Ninni Kronberg submitted a patent application for a new and improved method for the production of a longer-lasting powdered milk (patent 85916). This patent, together with her subsequent further-developed patent (96765, in 1937) would lay the foundation for a whole new industry.

Sweden had an over-production of milk but, because milk is a perishable product, it was not possible to export the surplus milk. Kronberg’s innovation made it possible for the surplus milk to still be used. The powdered milk was successfully trialled by the catering arm of the Swedish military in 1937, which contributed in the following year to Ninni

Kronberg being awarded state funding of SEK 25,000 by the Ministry of Agriculture for the exploitation of the powdered milk patent within Sweden’s borders.

One condition of this grant was the establishment of a Swedish limited company with capital of at least SEK 250,000 in order to manage the production. Sweden’s dairy cooperatives were approached but, unfortunately, expressed little interest in the powdered milk patent.

Instead, it was Axel Wenner-Gren – the founder of Electrolux – who realised the potential of the innovation. He invested SEK 250,000 in share capital and, in 1938, formed Svenska Mjölkprodukter AB (or SMP). Ninni Kronberg was not included in the SMP board of directors, which instead signed a licensing agreement for the production of powdered milk in accordance with her patent.

The idea was to begin by exporting powdered milk. The UK was particularly interested, as long-life products were ideal for the colonies.

SMP built a production plant in Kimstad (south of Norrköping), although the head office was situated in Stockholm. At times, Kronberg herself was actively involved in the work in Kimstad. Around this time, she formed the AB Skånskt Bindmedel company, which would use and further develop powdered milk as a binding agent in processed meat products, for which she was awarded a patent (87636) in 1935.

Production in Kimstad began on 1st September 1939. The outbreak of world war in the same month put a stop to all exports. Instead, the factory produced powdered milk for Sweden’s emergency food supply, as well as for the band of Swedish volunteers fighting in Finland. This enabled the company to get off to a good start, despite the wartime prevention of exports and, in 1942, an additional factory could be opened in Götene.

In 1940, Ninni Kronberg received further funding from the Swedish state. This time it was to enable her to continue her research in fields concerning dairy, bakery, and meat products. One of the results was that she developed a domestic concentrated feed for cattle, which replaced the wartime need for foreign feed cakes.

Aside from the war, the 1940s was also overshadowed by legal disputes. Ninni Kronberg sued the C. Bert Lilja & Co private bank and the estate owner Erik von Geijer for having attempted to illegally acquire her contract with SMP. She had pledged the contract as part of a business transaction with Geijer, who in turn (and without informing Kronberg) had sold it to C. Bert Lilja & Co – whose owner Carl Bertil Lilja was also chairman of the board of directors at SMP.

The court ruling confirmed Kronberg’s rights to the contract. Over the coming years, and for the rest of her life, Kronberg remained in dispute with SMP concerning the payment of

royalties. SMP contended that Kronberg’s patent had never actually been used in their production, so there was no justification for the continued payment of royalties.

At the age of 75, Ninni Kronberg died on 1 October 1949. SMP changed its name to Semper in 1963, and is today mainly focused on the production of powdered milk and baby food. For many years now, Semper has declared that Ninni Kronberg’s innovation formed the basis of the company.