During his long life, Johan Petter Johansson held no less than 110 patents. Two of the inventions, the pipe wrench and the adjustable spanner, brought him world fame, and are still sold all over the world today. 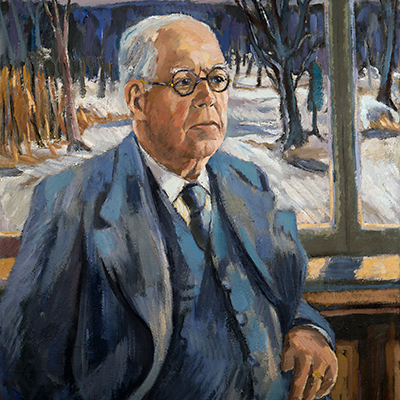 Johan Petter was born in 1853 in Vårgårda, Västergötland, in a crofter’s family. When he was 13, he rebuilt his father’s hand thresher, a machine that separated the head of the grain from the straw. The thresher was too heavy for the children to use but JP’s solution meant it could be pulled by a horse. When his mother complained about dangerous paraffin lamps that broke easily, JP learned how to solder tin and made a paraffin lamp out of metal.

As a young man, Johan Petter worked in railway construction and after his national service he got a job at Munktells Mekaniska Verkstad in Eskilstuna. This was when he designed his first invention, a lubricating nipple — this was a nozzle that provided machine parts with lubrication to reduce friction and load. Munktell took out a patent for the lubricating nipple.

In 1883, JP’s family moved to the USA, but he remained in Sweden and made plans to start his own company. In 1887 he bought a waterfall outside Enköping that provided power to his newly-started company, Enköpings Mekaniska Verkstad. A year later, Johan Petter had 14 employees and business was booming. As employer, he took care of his employees and their families, building both houses and schools.

In JP’s workshop there was always a set of pipe wrenches. Each wrench fitted a particular size of pipe so, for every job, the plumber had to take all the pipe wrenches in a trolley.
“I only had one set of pipe wrenches and when an employee took them out on a job, I was left without a single one… then it occurred to me that an adjustable pipe wrench would be useful”, he explained later in an interview.

In 1888, JP took out a patent on the adjustable pipe wrench. Its jaws could be adjusted so that it would fit all pipes, irrespective of size. The pipe wrench quickly became known all over the World.

Nuts and screws of different shapes and sizes also required different sorts of tool. The solution to the problem was the adjustable spanner, Johan Petter´s second world famous invention. However, he was not the original inventor as the first adjustable spanner had been invented by the Englishman, Joseph Stubs, 50 years earlier.

In 1891, JP Johansson took out a patent on a spanner with two movable jaws. One year later, he improved the tool, and it became today’s adjustable spanner. This time only one of the jaws was movable — the adjusting screw shifted the jaw until it gave a tight grip, which was a completely novel idea. JP Johansson’s colleague, Berndt August Hjort, started to sell both adjustable spanners and pipe wrenches all over the world. In 1892, 300 adjustable spanners were made, but by ten years later, annual production had increased to 4,000. In Denmark, the adjustable spanner is called a ‘Swedish key´ while in Russia it is called ‘sjvedik´ (the little Swede).

In 1916 JP handed over his company to his son Hannes and Berndt August Hjort so that he could concentrate on his inventions. Enköpings Mekaniska Verkstad subsequently became the global company Bahco, which has manufactured 100 million adjustable spanners to date.

Johan Petter patented 110 different inventions during his lifetime. He invented the sugar tong after his wife and his daughters complained about him digging into the sugar bowl with dirty fingers when he came home from the factory. When JP Johansson became older and his sight deteriorated, he designed the Triplex lamp that gave better light thanks to its adjustable pendulum.